The History of Baywood

There are a number of reasons why Baywood is rated the third best golf course in the close to 500 mile stretch between San Francisco and Bandon Oregon.  One of them is that it’s located on a great piece of land, second is it plays through the redwoods and third, like the other two top rated courses, it was designed by great golf course architects. Meadow Club in Marin County was designed in 1927 by the greatest architect of all time, Alister Mackenzie.  Mayacama, outside of Santa Rosa was designed by Jack Nicklaus in 2001.  Baywood has had three outstanding designers over the years.

The original nine-hole course was called Bayside and was the design of one of the country’s greatest players, Chandler Egan, in 1933.  How Egan got to Baywood in the first place is a story in itself.  He was a Chicago native born in 1884 and wound up going to Harvard where he was the National Collegiate Champion in 1902.  In 1904, he was the U.S. Amateur Champion, the Western Open Champion and Gold Medalist in the Olympic Games held in St. Louis (incidentally, the last Olympics to have golf until Rio in 2016).  In 1905, Egan won the U.S. Amateur again, an event on par with the U.S. Open at the time.  He was the best player in America.

For reasons not exactly clear, Egan and nine other Harvard graduates moved to Medford Oregon in 1911 where he became a rancher and then began his golf architecture career.  He could still play though as is evidenced by a team match in Portland Oregon at Waverly Country Club, an Egan Design, against the world’s best player, Harry Vardon and his partner, Ted Ray, from Great Britain.

This was in 1913, just weeks after Vardon and Ray were upset by unknown amateur Francis Quimet in a 3-way playoff for the U.S. Open Championship.  The match has been memorialized in the film “The Greatest Game Ever Played” and was the catalyst that sent the United States to preeminence in world golf. It was a great 36-hole match, with the British pair defeating Egan and his partner on the final hole by one shot.  Ironically, Egan was Ouimet’s role model when he was growing up.

Egan continued to play, winning the Pacific Northwest Amateur Championship five times and the California Amateur twice, but architecture became his passion.  He built courses in Oregon, Washington and California. In 1929, he teamed with the great Mackenzie to remodel The Pebble Beach Golf Links for the U.S. Amateur that year.  The time spent with Mackenzie was a great learning experience for him and he put it to good use designing the first nine holes at Bayside four years later.  (Interestingly, Pebble was designed by 5-time California State Amateur Champion, Jack Neville and Douglas Grant in 1919.  Neville was both a friend and rival of Egan’s).

Egan was highly respected by everyone in golf.  When he passed away from pneumonia in 1936, Bobby Jones, the greatest player ever until then, traveled four days to get to the funeral service and even wrote the eulogy.  Jones had previously invited Egan to play in the first Master’s Tournament in 1934.

Bayside was open from 1933 until 1941 when it was essentially abandoned during WWII.  In 1945, local golf legend, Mel Babica received a 20-year lease on the property and set to putting the course back in order.  Before that, Babica was a touring pro from 1931 until 1942 when he entered the service.  He was on the staff of the MacGregor Golf Company, as was the great Ben Hogan.

In late 1948, Hogan was finishing up one of the greatest years in golf history and was playing an exhibition in Redding and agreed to come over to Bayside and play in an exhibition match with Mel.  Back then there was no Hwy. 299 or Hwy. 36, so Hogan had to drive down to 20, cut over to 101 and back up to Eureka where he stayed at the Eureka Inn.  The next day, they played the match with some other Humboldt golfers.  Now Hogan was famous for being the coldest golfer to ever play and he proved it that day by virtually not saying a word to anyone, or even acknowledging their existence.

When the match ended with Hogan winning by one shot, Mel was at a loss of what to do with Ben, so he came up with fishing.  So, they go up to the Mad, cast a few lines and then you couldn’t shut Hogan up.  He loved fishing and turned out to be one of the great guys telling countless stories of life on tour.

Hogan left Humboldt the next day and was playing his way back to his home in Texas.  He stopped in Oakland and Los Angeles and was headed east when on a foggy night in February of 1949 a Greyhound Bus crossed over the line and hit Hogan and his wife Valerie head on.  Hogan instinctively dove over to protect his wife and it saved his live too as he would have been impaled by the steering wheel.  He was in the hospital for 59 days

Hogan had won 13 times in 1948, including 2 major championships and it didn’t look good for him, but with his famed determination, he started playing again and won 6 more major championships in his famed career.  Who knows what would have happened if he didn’t come over to play the Bayside exhibition, but he probably wouldn’t have been in the same place at the same time when that bus came by.

In 1956 a group of Humboldt businessmen led by Arcata Redwood President Howard Libby, Herb Petersen, Cliff Mitchell, Jack Daly Jr., O.F. Olsen, Dick Nash, Lawton Bussman and Chet Morell among others, decided to start a country club.  By all accounts it was Libby who was the driving force behind the project.  The Bayside Land and Investment Company incorporated on September 24, 1956. They sold 5,000 shares of stock for $100 each raising $500,000 to design and build the golf course and clubhouse.  The directors decided to hire Bob Baldock, one of the best architects in Northern California to design a nine-hole course.  Baldock has designed over 80 courses, including the Shore Course at Monterrey Peninsula and was given one of the best pieces of land for a course ever.  He didn’t disappoint.  The back at Baywood is one of the absolute best nines anywhere and was certainly Baldock’s best work.  The course opened for play in 1958 so you had two courses side by side.  The original Bayside and the new Baywood.

In 1964, Babica’s lease ran out and the Baywood Golf and Country Club was able to buy the land and brought back Baldock to do the renovation.  In 1966, it was opened as an eighteen-hole course, but it still had the feel of having been designed by different architects.  In the late 1970’s, under the direction of Bill Carson, the club hired Robert Muir Graves to redesign the course and it was a major undertaking.  Bob Graves was one of the first college trained landscape architects to work exclusively on golf courses.  In his career, he worked on over 300 of them.  And he was the President of the American Society of Golf Course Architects, the highest honor in the field.

Eleven greens were torn apart and rebuilt.  All the bunkers were reshaped for both their aesthetic and strategic values.  The work continued into 1980 and when Muir Graves left, Baywood remained as one of the best courses you can play anywhere. 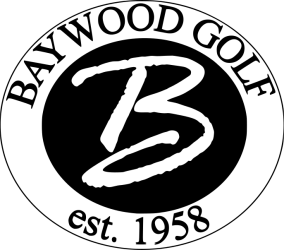 STAY IN THE LOOP: